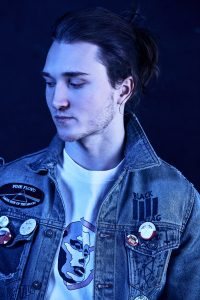 Alec is 23 years old, born and raised in Täby just outside of Stockholm where he has lived his whole life. With an older sister and supportive parents Alec’s teenage years were mostly focused on mountain bikes and music. When Alec was 10 he started cycling as a profession and competed intensely until he turned 20. Alec’s interest in music initiated when he was 13 years old and he taught himself how to play drums at home. He mostly played jazz and committed himself wholeheartedly into different projects, often alone as jazz wasn’t interesting for his peers. After being introduced to drums, Alec interest for creating his own music started to advance. At the age of 16, his music itself became a way of changing the reality he lived in as he could shut himself in and focus entirely on the creative process. As movies always has been a major interest, Alec has found a lot of inspiration from different films and he always tries to have a cinematic touch on what he creates. A flourishing film interest opened the doors to a major music engagement, and after preparing demos for several years, he chose to submit his material to TEN Music Group – and the company immediately wanted to signed him.

After being signed to TEN Music Group, first as a songwriter and producer, Alec spent most of his time producing music. Among other things he did a few remixes for Icona Pop and produced jingles for Gröna Lund and Lufthansa. At the end of 2016 Alec signed with TEN Music Group as an artist and has since then worked on finding the right song that he wants to release as an artist. When he first heard ‘Hometown’ it was only just a guitar line and acapella-singing. Alec felt right away that he had a vision for the song and the production. He is influenced by bands like Black Sabbath, Pink Floyd and Death Grips, but he describes his own music as “Dance-pop with influences from rock.”

The completion of ‘Hometown’ was finished to the movie ‘Sansho Dayu’ as he wanted to capture the feeling of the visuals in the film. Watching movies and getting inspired by them helps him with the creative process, and Alec considers that creativity comes from hard work and that you should never give up even though you are stuck in a pattern.

With big dreams like selling out venues of the like of Red Rocks, Colorado and achieving all kinds of music cliché goals there is, Alec now has several songs finished to follow up his debut ‘Hometown’.